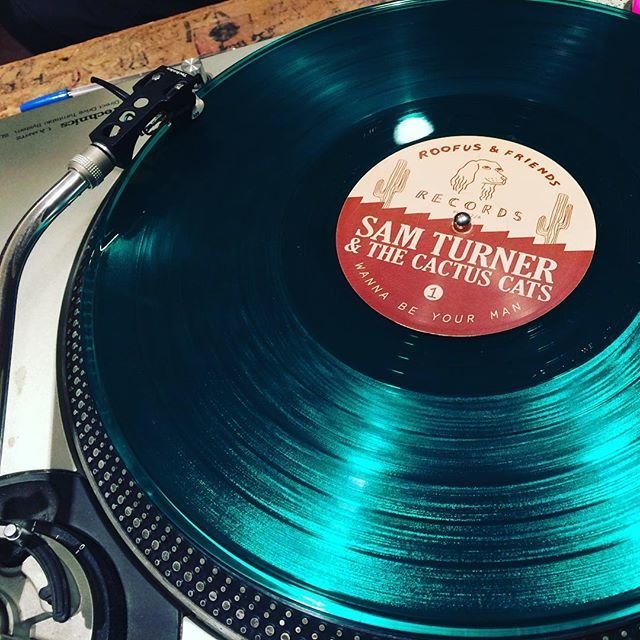 Wanna Be Your Man is the debut album from Houston, TX based Sam Turner & the Cactus Cats. Equal parts grit, croon, and home-cooked, comfort-food goodness, Wanna Be Your Man spotlights songwriter Sam Turner, who belts out carefully crafted lyrics in that indescribably iconic way only soulful men and women of yesteryear are known to do. “It’s neurotic,” Turner laughs while describing his own singing, “A blend of fear and hopefulness.” But that may also be because Wanna Be Your Man shares wisdom and confusion found in the wake of a master lyricist’s journey from the first love of his life to the next. The album even starts with an optimistic bravado in the title track Wanna Be Your Man, while finishing with burning realism in Thank You, I Love You, Goodbye. Drawing inspiration from legends like Otis Redding, Sam Cooke, Townes van Zandt, and others who found something new to sing on old matters of the heart, Turner ponders on what he had, has, and wants — and whether there’s ultimately any true difference between the three.

On the road leading up to the release of Wanna Be Your Man, Turner joined with musicians who tastefully match and coat his powerful singing: the Cactus Cats, with Michael Trakhtenberg on lead guitar (of Backyard Beehive), W.D. Hesser on bass/vocals (of As Eden Burns), and Troy Tabner on drums/vocals (a.k.a. Baby Lucy). Since 2014, Turner & the Cats have honed their live game at fundraisers, a wedding, a city marathon, a goat roast in the country under a full moon’s sky ­— as well as many, many bars, lounges, halls, pubs, and watering holes. The casual listener may hear them and think ‘laid back college rock’ or ‘indie desert folk pop’, but press from their recent Texas tour aptly described the group as: “a honky tonk’s wet dream.”

Hearkening back to the songwriter’s biggest influences not only in composition but in music production, Sam Turner & the Cactus Cats recorded Wanna Be Your Man over the course of 48 hours. All together in the same room. Live. Onto half-inch tape with only eight tracks. The decision to forego the studio magic of recording individual parts on multiple tracks speaks to the unified and present force of this musical collective. “It’s not a polished recording, but what you hear is a direct result of us playing and listening to one another,” comments drummer Troy Tabner, who also co-engineered the album.

In Wanna Be Your Man, Sam Turner & the Cactus Cats deliver a powerfully satiating and driven sound to get you out of your mind and up off your seat, all while promising to have you home before midnight.

Wanna Be Your Man was recorded at Steamboat Ampworks studios in Houston, TX ­— with the support of many friends, pups, BBQ, and brews. All songs written by Sam Turner (BMI) and performed by Sam Turner & the Cactus Cats. Album produced by the Cactus Cats; engineered by Harold Scott, W.D. Hesser, and Troy Tabner; and mastered by Justin Perkins of Mystery Room Mastering. All 300 records were pressed on beautiful, translucent, green-colored 150 gram vinyl. Each LP includes a digital download code and an inner sleeve with photo collage listing additional production credits.

Save this product for later